Talking About Experience with A380

Share on facebook
Facebook
Share on google
Google+
Share on twitter
Twitter
Share on linkedin
LinkedIn
The first time I boarded A380 was from Saudi to UAE. Since it was my first time, I was embraced with excitement and impressed with the size of the plane. I felt like’ “oh, my this is so gigantic!’. The wings was as long as my house (seriously). A380 is a long plane and has two storeys. First and business class is at the top like Boeing 747. Ekonomi mestilah kat bawah je.
It started with amazement, then there was an announcement of 10 minutes delay. 3 passengers could not board the plane due to security reasons, thus their luggage had to been unloaded. Yes, it is VERY IMPORTANT to unload the passengers’ luggage and it is one of the policy. A series of Aircrash Investigation hits my head. In a flight to Japan, there was this passenger. He just checked in but didnt turn up to board the plane. And they didnt unload that particular passenger’s luggage. And in the luggage, there was actually a bomb. Yes, it exploded the plane. Failed to board the plane due to security reasons? Hurm. Drug trafficking? Terrorists? All assumptions are influences from TV.
And then, 10 minutes to arrive in UAE, I heard a stewardess yelled, “Madam, can you hear me?!”. Her voice was kinda loud and I sensed there was an aura of panic in her voice. Again, worst case scenario hit my mind. Well, no one passed away, no CPR, no extra oxygen through the tank given. But the stewardess contacted medical team to prepare themselves as soon as the plane arrive at the terminal. Looking at the rush and panic of the steward and stewardess, i take a guess, this might be their first time to encounter such case. And lucky, a doctor was there to help the woman gain consciousness.
I used to see a series of Victorious (Nickelodeon) and saw Victoria chatting when she was on the plane. I was like, how can she get internet access. and yes, this Emirates A380 offers wireless connection although it is at 39000 feet, but no wifi during taxi, take off and landing. Konon nak guna wi-fi dengan Ipad tapi zzzzzzzz…..
The second time I rode on A380, I slept 3/4 of the destination which indicated I am no longer excited. In fact, I didn’t even realise it was A380 until I was about to arrive in Kuala Lumpur. Maklumlah, dah biasa naik kapal terbang besar sekali, bila kali kedua jumpa kapal terbang besar, rasa macam biasa-biasa pula. Ecehcehceh. Since the size of the plane is gigantic, turbulence was minimised especially when you cross the Bay of Bengal (somewhere near in India). Less turbulance means good news for Mumy and Dady 🙂 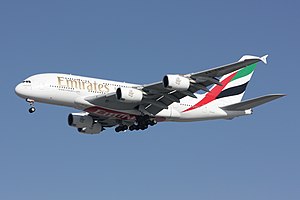 Gambar semua dalam camera lagi
Ramai orang cakap Emirates best. To me, it is not my favourite airline. Well, I rode on 3 middle-east airlines and seems that Emirates is the only one who didnt recite and view the doa of having a safe trip on the passengers’ screen before take off. Yang penting adalah makanan halal. Tak payah pening fikir. Cuma Etihad vs Emirates, I choose Etihad though Abu Dhabi airport is not as big as Dubai’s.
And to this day, Kuala Lumpur International Airport is the BEST airport. Free wifi, clean toilets, plenty of shops and many more facilities are offered for the customers. Yes, I am a Malaysian but I’m not bias!

4 thoughts on “Talking About Experience with A380”